You're Good To Go! 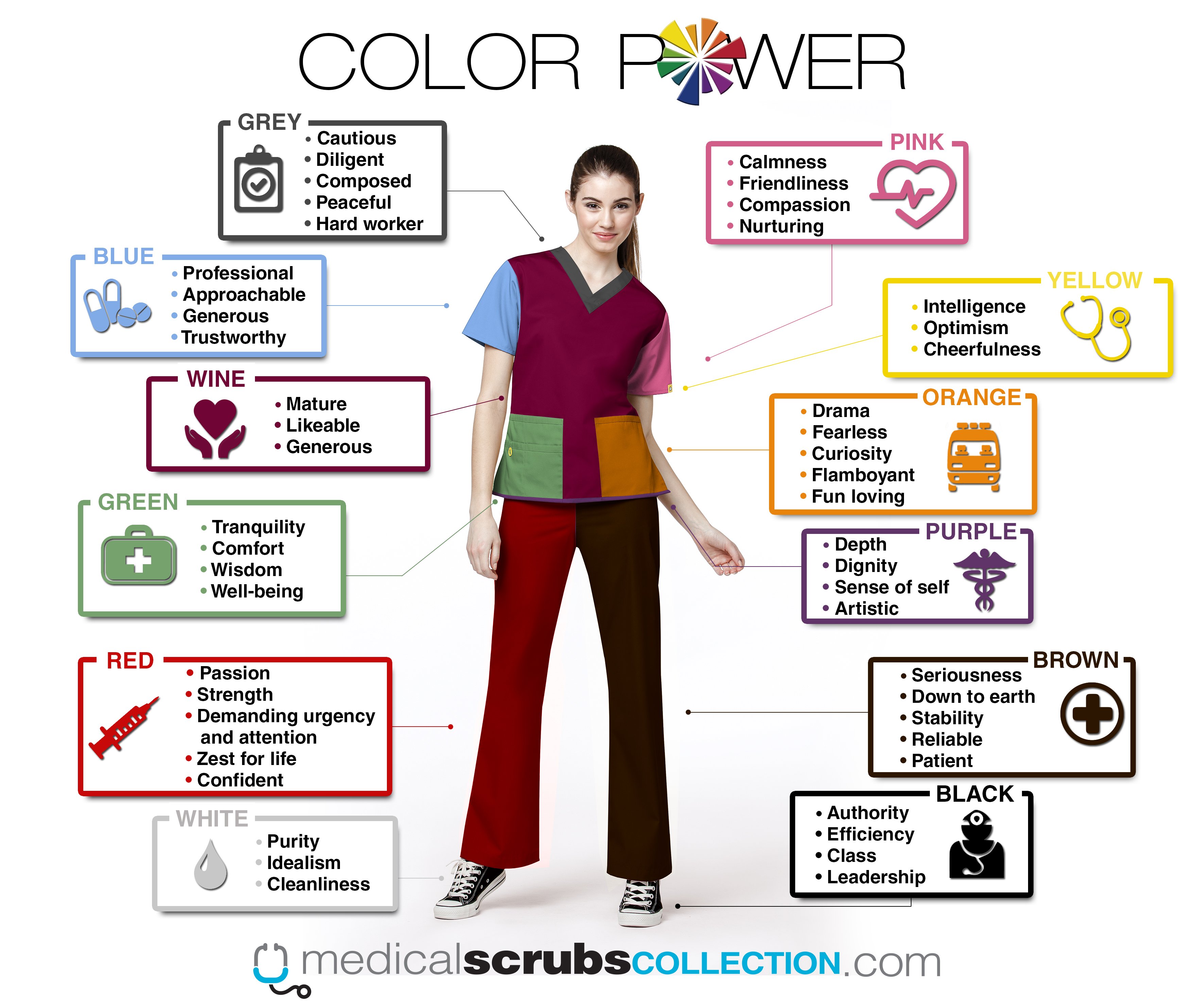 The Amazing Power of Color

Take a peek inside your local hospital, the nearest nursing facility, or even your dentist’s office, and you’ll notice that all staff members, from head surgeon down to the front desk receptionist are all identically clad in the classic medical scrubs getup.

What used to be reserved for doctors and nurses alone, is now being worn by the entire facility staff, including social workers, dietary staff, housekeepers, and even file clerks. While perhaps a bit boring on the eye, there’s a definite upside to this uniformity- no pun intended! It creates a sense of camaraderie among the staff and lends an air of professionalism to the medical facility. Plus, the days of dealing with the age old dilemma of “what should I wear today?” are officially over. (That’s five more minutes of precious sleep time!) And if you’re lucky enough to work in a facility that provides their staff with free scrubs, you’ll hopefully find yourself the proud owner of some extra pocket change.

Despite the advantageous aspect of this relatively new phenomenon, it has actually been a cause for some confusion on the patient’s part. Doctors are being mistaken for nurses, and even housekeepers for CNAs. On a whole, though, it’s still pretty clear which job title each person holds thanks to the trusty badge which clearly states the name and position of the wearer. To further avoid confusion, many hospitals have even begun color coding their staff based on department, clearly delineating which department each staff member belongs to. Once again, this effort helps portray a coordinated look that conveys a professionalism and unity which positively affects staff members and patients alike.

Ever notice, though, how there are some colors which are so popular amongst nurses that they almost seem like the universal nursing color, while others not so much? It is not just coincidental that most nurses wear blue, while surgical staff is almost always found in green. There is actually a certain power or feeling that each color conveys, which affects the mood of not only the wearer, but those viewing him/her as well. For example, the nurse’s ‘blue’ scrubs make the wearer seem professional, yet approachable; precisely how nurses want to be portrayed. It’s amazing how something as seemingly simple as clothing colors has such power!

Let’s go back in time with a bit of history, and see how colored nursing scrubs all began. Shall we? Back in the beginning of the 20th century, doctors and nursing staff all wore the classic, white medical uniform. White represents cleanliness and sterility; something every patient expects in a hospital setting. Sometime in the mid-1900s, green became the official color of the surgical team. What prompted the switch from white to green? Green is in fact a calming color, known to be easy on the eyes. Surgeons found that their brains became desensitized to the red color of blood after staring at it for long periods of time while in surgery, and discovered that looking at something green from time to time kept their eyes more sensitive to the red color. Thus, the official color of surgical green was born, as well as the concept of the ‘colored’ scrub.

While surgical green was just the tip of the iceberg, years of research has proven that each color truly has associations with certain feelings, and has the power to create a specific mood. Knowing what each color represents and the power it possesses can help medical professionals get the most out of their nursing scrubs, (that is if you are lucky enough to have a choice as to which color you can wear).

So go on and utilize this knowledge to your benefit by setting the mood and providing your patients with the most positive experience you can!

Paste the code below to embed our infograpic on your site!

Let's talk in real time. We have the answers to all of your questions!

You're the reason we love checking our emails.
Click here to send one our way!

Give your scrubs that personal touch with our embroidery options.

Points with every purchase. Now that's shopping made fun.

Because it's the simplest way to show you care.

She's a fashion guru, and the voice of reason every shopper needs.